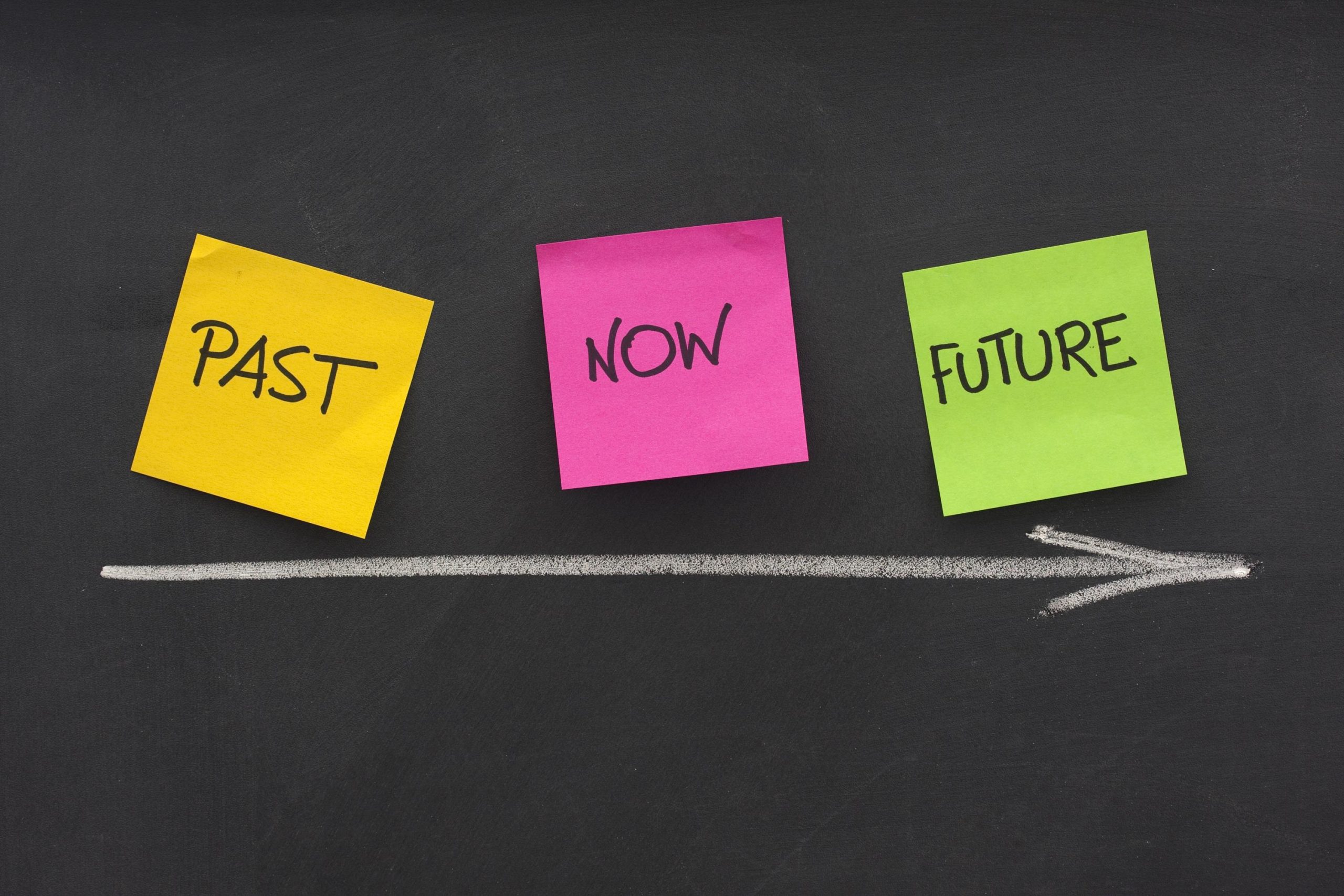 A fundamental challenge of mankind is that all our decisions are about the future, but we always must take them before fully knowing the circumstances of the future. To make matters worse, there is no method of knowing beforehand that we make optimal choices, allocate resources to the best course of action, or rely on the ideal strategy. It is, however, possible to unbundle the likely drivers of development and assess them individually to get a better basis for decision-making. Some factors, like the development of ideas, attitudes and knowledge are very unpredictable and can be given special attention if separated*. Other factors, like trends in demographics and technology, are more likely to follow patterns that can be modelled to some extent and then get incorporated in projections about the future.
For time horizons too long for reliable forecasts, some have found it useful to try prospective methods for framing and describing the future. But rather than predicting it, it’s a matter of envisioning possible future states so that courses of actions can be discussed and assessed. Envisioned futures, or scenarios, makes it possible to test strategies against varying assumptions and different path of development. A commonplace example is the use of extreme scenarios, such as in best-case versus worst-case analysis.
More elaborate methods for developing scenarios emerged during the 50ties and became increasingly popular over the 60ties to 80ties. Techniques were created for dealing with high uncertainties of future development that is influenced by complex networks of factors and still end up with a limited set of different possible futures. By developing multiple, plausible images of the future that have internally consistent factor combinations, a basis for deriving strategic implications is achieved that can support planning and decision-making. Normally, you want the scenarios to collectively cover a large part of the possible future. 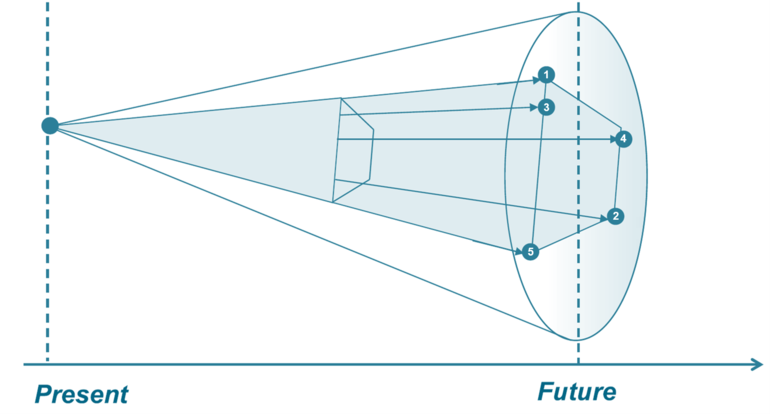 Five scenarios together covering a large part of the plausible future
An important concluding step in the process is the naming and describing of the scenarios. To become clear and useful mental models of possible futures, great care must be taken to derive names that illustrate the underlying nexus of factors as well as possible. Misleading or unclear names will ruin much of the effort put into rigorous analysis and may produce flawed strategic choices. The same applies to the scenarios themselves, which should be portrayed in a convincing and straightforward manner that is easy to communicate and accept, while maintaining their meaning and difference.
Classic Scenario Generation
There are several ways to come up with scenarios. In the classic approach, the starting-point is to generate a large set of factors that have bearing on a specific question about the future. This set is then sorted into trends and uncertainties and gets thoroughly processed, examined, and rebundled in a series of workshops until two major uncertainties remain that are the principal drivers of difference between possible futures. The work of coming up with the final set of uncertainties is rigorous and based on discussions and qualitative methods of analysis. Often, decision makers acquire support from external experts to guide the process, to make sure they come up with a reliable result. Classic scenario planning appears to be the dominant approach in corporate foresight, at least in Europe.
An advantage with this approach is that through broad involvement in the discussions; organizations can benefit from greater understanding, acceptance, and buy-in of the scenarios and resulting the courses of action.
IT-supported Scenario Generation
If the classic method can be characterized as intuitive and consensus-driven, the IT-supported approach is considered by most to be systematic and models-driven in comparison.  Starting in a similar way with a list of factors that are sorted, prioritized and cleaned from overlaps etc, the formation of scenarios is done differently. To reduce the number of subjective stages in the analysis and stay open for pattern that emerges from the “data” it relies on numeric methods, normally through software support. In simplified terms; all factors get pair-wise assessed for consistency by the forecasting team. Then the computer reviews all combinations of factor outcomes (scenarios) and indicates their internal consistency. The method generates many thousand combinations that form clusters on a heat-map. The analysts then choose a small number of the most consistent scenarios to illustrate and form narratives around.
While these scenarios might cover a smaller span of the future compared to the classic approach, the advantage is that they are evaluated for consistency and therefore more likely in some sense. The quantitative method is also considered to be more objective and less time-consuming. As usual, the choice of approach is primarily a matter of applying the right tool to the right problem.

To provide strong and useful scenarios, both the qualitative and quantitative approach requires substantial effort and time. Responding to clients’ requests for less cumbersome methods of future study Rohrbeck Heger, an international foresight and innovation consultancy, recently developed the Lean Scenario Canvas. This method enables firms to complete an analysis within one day, in contrast to the weeks or months required by the traditional approaches. Three simplifications accomplish this. First, the method does not generate full-blown descriptions of the future, but rather target a specific issue only and generate outcome in the form of an action list for dealing with that issue. Second, it is done by a specific process supported by tailored templates that make the work targeted and efficient. Third, the process includes inspiration from archetypical scenario themes found in meta-research on scenario analysis. Decision makers can use this to create own variations from scenarios that typically emerge rather than starting scenario formation from scratch. The Lean Scenario method is new and very promising. It has already been successfully applied to a number of real-life business problems and its main advantage is being very fast, while loosing relatively little of the analytical power as long as the scope framing is upheld.

Scenario-building is intended to improve decision-making by allowing consideration of outcomes and their implications. With full-blown scenarios (but not Lean Scenarios) not only the outcomes are observable, but also the development paths leading to these outcomes. This can be a starting point for forming contingency options for the main strategic plan, thus achieving strategic agility. Other methods, such as windtunneling strategies by testing them against multiple scenarios, helps companies improve strategic robustness and achieve higher probability for long term prosperity.

It appears that scenarios can be supremely helpful for capturing a profitable position in the markets of tomorrow!

*New ideas and knowledge are driven by existing ideas and knowledge, and as Dreborg puts it “…if we believe that people will get new ideas and acquire new knowledge also in the future, then we cannot hope to be able to foresee the development of a social system in the long run”. This makes the future inherently unknowable and exponentially more uncertain the further away we look.