In the hottest of hypes right now, digitalization seems to be on everyone’s lips and mind. But it is difficult to get precise answers to what digitalization is and how it specifically impacts businesses. This blog post is an attempt to give proper perspective on the phenomena by studying the fundamentals. In this second part (of 3), we will examine some ongoing business phenomena and how digitalization is linked to disruption. To get the basic concepts, I recommend that you read part 1 first.
Continuing on the idea of using IT for doing current jobs in a better way explained in part 1; valuable services has recently been created that can organize, store, and process data. Taking advantage of today’s ubiquitous digital networks, innovative companies have driven effectiveness up and cost down by putting storage and processing at a core location that its users can access with relatively lean and purpose-built hardware (e.g. thin clients). The opposite has also been proven useful; distributing storage and computing out in the net, thereby increasing security while lowering maintenance costs and freeing organizations from heavy IT investments (e.g. cloud solutions). Networks thus remove the limitation of proximity needed between the various basic operations within an IT application (see part 1). In other words, operation combinations can be distributed to the best physical locations and the results converge to the user anywhere and anytime, as operations no longer must be done within the same hardware system.

However, the most dramatic effect of digitalization is probably its widespread disruptive effect on old industries. In simple terms; disruption is when established ways of doing things get replaced by new ways that solves problems better or require less cost and/or effort. Usually such new solutions come from start-ups or other companies ‘invading’ the mature industry, rather than from established players who neither can nor want to disrupt their own business. This is not unique to IT, but a pattern typical for industry development in general. But digital technology is to some degree special. It allows for value propositions that are remarkably insensitive to classic industry entry barriers. Linking the digital and physical worlds by exploiting ubiquitous connectivity and an abundance of data – obtained from crowdsourcing, remote monitoring, and machine-to-machine communication – digital entrants create new ways of delivering value that put incumbent actors’ resource-based advantages out of play.
Disruption always requires a strong increase in value, which we sometimes call a better ‘value proposition’, [see forthcoming article]. But more often than not, the new offerings disrupt by delivering good-enough utility at a dramatically lower cost, or by new ways to deliver value or connecting to customers – not by delivering more utility (= satisfaction of needs). All successful Internet unicorns follow the same pattern. They challenge the established mature and bundled value propositions with an unbundled but superior value proposition, produced with very low variable cost and a minimum of owned (physical) assets. After gaining a profitable foothold in the market, some of these entrants grow by broadening their offering (or diversification) while others pursue product leadership strategies. Examples of specific disruption patterns include:

These effects have been used separately and in combination by various ‘unicorns’ and other hyped startups. Consequently, disruption has become so commonplace that few industries are completely ignoring it (there are some, and you know who you are!). 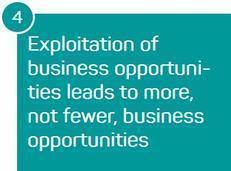 Now if these examples make some feel that disruption is something negative and more of destructive creation than “creative destruction”, there are also reasons to be optimistic. It appears that innovations’ economic impact on society is multiplied by something called the “Särimner effect”. In essence, it means that the exploitation of business opportunities results in more, not less, business opportunities. Just like with technology improvements, the Särimner effect is also recursive. So even if obsolete practices get pushed out, the disruptive new solutions often lead to the emergence of whole economic ecosystems (c.f. Apple, Amazon etc). Thereby it unlocks economic potential in other technologies that now becomes usable (eg. legal streaming unlocked by IP networks even though these disrupted voice telephony). Also, remember that the user value is all the time increasing, which is one of the main drivers of the living-standard in the west growing over 6,000% in 100 years – happening even faster right now in all developing countries in the world, except those that suffer from war or communism.

A 3rd Wave of Digitalization

As increasingly advanced network and computational capabilities are employed on massive data sets, new solutions keep becoming possible. If automation of previously manual work was the first wave of utility from digitalization and the disruption of old business models was the second, we can now see the patterns of a coming third wave. Interestingly, many business examples in this wave comes from unlocking value by pushing, or even exceeding, the limits of the digital technology itself!
One such pattern concerns removing the limitation of humans being the sole providers of input and programming. Feeding networks from distributed sensors and machines in operation can integrate processing capabilities more deeply into our daily life. When machines talk to each other (M2M) without involvement from a human user, new value can be obtained by automating more of the collection, organization, analysis, and presentation of information into forms that are much closer to the user’s actual needs. In fact, many tasks can be completed without bothering the human user at all. In industrial applications, the need for manual intervention and proactiveness in production, quality assurance, and maintenance gets radically reduced if products and components are automatically monitored in real time (e.g. Industry 4.0). We can therefore look forward to substantial cost savings and improvements in reliability for just about everything complex that is manufactured. This will contribute to the developing world caching up with the industrial one even more quickly than today, especially since similar developments can be observed in both food production (digital farming, food 2.0) and energy production (smart grid, smart metering), giving promise of a better future globally.
Pushing the limits of IT to new heights also makes it possible for software to create new software or to alter itself. This makes machines able to learn and will in extension make them artificially intelligent (and in the long term potentially also able to have personalities – read about this in the forthcoming part 3 [link] of this article.) AI is a controversial subject. In the early days of computer science, it was already clear that machines could potentially one day be made intelligent, but it has mostly been a laboratory phenomenon until more recently. AI, as a technology innovation, follows the usual patterns of first being applied to automate what people are already doing, like medical diagnostics or translation work.*
In the AI hype right now are the “smart” personal assistants, where Google, Apple, Microsoft, and Amazon are competing intensely for leadership. It is easy to understand why; these assistants are expected to direct customers to products and services in the future, so it is an emerging arena for enormous ad revenues. 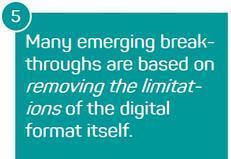 However, let’s examine some new areas of innovation that are arising through removing limitations of the digital format itself. The first example concerns the limitation of digital creations being intangible. While it is useful to make virtual models and creations, much of what can be done in the digital domain is primarily of intellectual value until things are actually manufactured. 3D printing has revolutionized small scale manufacturing by removing much of the disconnect between digital creations and physical manifestation. Again, it is initially mostly used for making current activities easier; like rapid prototyping or creating spare parts. But it has a lot of potential, especially as the technology keeps improving in material capability and precision, since it among other things allows for the creation of compound products that are impossible to assemble.
Another example regards the format aspect of effortless replication, which is an advantage when sharing digital objects but a disadvantage when trying to sell them. If people can make copies without paying it has a hampering effect on creators’ willingness to make efforts, even though some naively argue that this is not the case. But if ownership can be reliably recorded by independent automatic solutions, the rewards of creating high-value digital object at a much wider scale becomes unlocked. Such technologies, distributed ledgers, for example, can also disrupt middle-man roles built on trust, such as banks (even central banks some believe). A big part of these trusted third parties’ function precisely to ensure that an asset like money disappears from one person when being moved to another, in contrast to replication where both retain a copy. These solutions can also safeguard against illegitimate use of another basic operation; data manipulation, by ensuring that both the digital content and the sequence of manipulation are consistent in the distributed ledger. With resistance to both forgery and duplication, we are currently seeing these technologies applied in exploring possible digitalized currencies, although current institutions of power are rightfully concerned about these being misused for crime, tax avoidance, and similar issues. Nevertheless, the Swedish Riksbank, among others, is already experimenting with an eKrona, a digital national currency, which will be interesting to follow!

* Translation, by the way, is particularly important as it can remove the largest remaining trade-barrier; the language barrier. Freeing the world from the limitation of language and enabling true global communication will have a tremendous effect on social and economic development in coming decades. We can only hope that it will also help people understand each other better over geographical, political, and religious borders.